The East Kent Ploughing Match is an annual event that has been running for nearly 80 years.

Attracting thousands of visitors each year, the event not only draws tough competition between modern, old and horse drawn ploughs, but is a fantastic outing and educational opportunity. 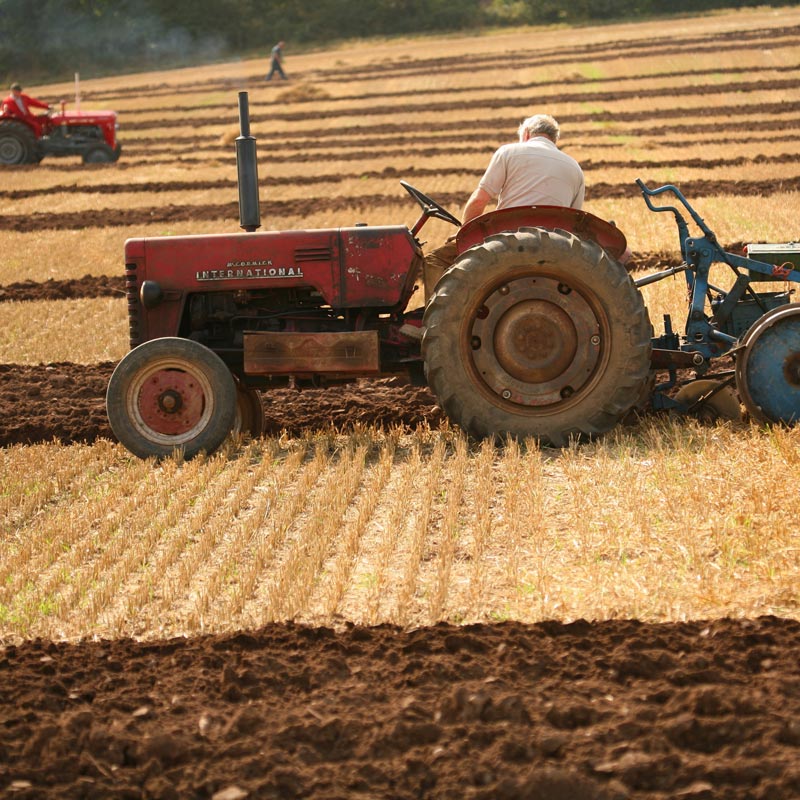 The East Kent Ploughing Match Association was established to encourage all those employed in agriculture to enter competition in which prizes are awarded for skills in ploughing with tractors, vintage and horses, and also for excellence in crop husbandry.

The Association also aims to educated the general public in the fundamentals of agriculture and to impart a greater understanding of the relationship between farming and the environment.

When research was undertaken in to the history of the East Kent Ploughing Match Association it was discovered that it had existed under one name or another since 1840. Some of its first members could recall the days of the Napoleonic wars. The history was plotted through the Kentish Gazette who have given full coverage to nearly every match since the Association's inception.

Many East Kent agricultural associations came into being in the 1830s. At this time there was an agricultural depression and action was taken to assist the rural poor through the Poor Law Amendment Act and because this was operated harshly in the early years many agricultural assocations were formed. From 1833 there is mention of a Kent Agricultural Society and an Isle of Thanet Agricultural Association who had as their patron, the Duchess of Kent. Following the creation of these societies there very quickly developed similar such ones in Faversham, Nonnington, Dover and Deal and Chartham.

Leaping forward it was in 1945 that the Shepherdswell and District Ploughing Match Association (an offshoot of the Kent War Agricultural Executive Committee) met to talk about forming a Ploughing Match Association. They listed the founding members in the minutes and the date of the event and the membership fee. After 4 matches in 1950 the Association adopted its present name to reflect its size and scope. With its growing success the Committee also decided to introduce more entry fees, drive membership and allow advertisements in the schedule and catalogue. From then on the show has developed in to what it is today, introducing in 1954 the Tossing the Sheaf and display of the Foxhounds. It has introduced livestock competition, vegetable competitions and from early on in the 1950s a thriving Women's Section.

Ladies were first involved by selling catalogues at a shilling (5p) a time. It was in 1950 when the Association changed its name to the East Kent P.M.A that the possibility of a Women’s Section was first suggested by Ella Robertson, John Robertson’s wife of Appleton Manor, but it was not thought to be financially possible that year. However she and a number of P.M members’ wives formed a committee of their own and were able to put on their first show the following year in 1951.

They were a remarkable collection of Ladies, mostly Farmer’s wives in their 40’s or early 50’s who had worked so hard during the war coping with shortages and the worry of children being evacuated from this hot spot of East Kent, followed by a difficult 5 years getting back to normal.

To learn more about the history of the Women's Section, read our short version here or our long version here - or better yet, read both!

The Rural Crafts Marquee was the idea of Mrs. Janet Lyons from St. Margaret's, Dover and the first event took place in 2005 at the Quex Park Ploughing Match in Thanet. There were many crafts demonstrating as well as stallholders selling their craft. It was stipulated that all crafts should be handmade or crafted by the stallholder.

It proved to be an extremely successful event and the demonstrating crafts were of great interest to the public e.g. spinning, lace-making, wood-turning, trug making and basket making. Many of these crafts still demonstrate at the Match to this day. There are approximately 24 stallholders and 10 demonstrators. The Marquee has seen an increase in size in recent years.

Liz Phillips has organised the Marquee since 2007 and is now assisted by Joanna Donaldson.

We have to say how grateful we are to all our very generous sponsors, without whom we could not put on the event and help keep these very wonderful Crafts alive.

All those associated with farming enjoy the day and the Association warmly welcomes all those in the local community to attend and enjoy a day of agriculture, competition and rural pursuits.

Join us at the next Ploughing Match

We'd love for you to join us at the next East Kent Ploughing Match.
Find out more about the next event and buy your tickets online!